Working with an inbound marketing agency can lay the right foundations for an expert campaign. Having access to experts in your knowledge blind spots can save precious marketing budget, destress your frazzled team and free up your time to focus on core business activities. And yet...

“I know my market better than anyone because I am my market.”

“There’s nothing you can tell me about my industry, I’ve been in it for decades.”

“That probably won’t work, I can’t see them liking that…”

We luckily haven’t heard those sentences yet at Six & Flow, but we have heard utterings like them at some stages of our career and from friends working across the industry.

It’s essential to point out, too, that these aren’t necessarily bad or unwelcome phrases. Some people are more set in their ways than others, and once they see the benefits of a new approach and how it can help grow their business, they more often than not embrace change.

A good agency will work with clients, not against them

What about those voices above that believe so strongly that they’re the embodiment of their industry, though, and are too staunch to change?

They’re great, and nothing beats the knowledge that an experienced hand can offer. At the same time, though, times and trends can change and the closer somebody is to an industry, the harder it can be for them to see and notice.

We call this a ‘knowledge blind spot’. Everyone has one, and sometimes the only way to fill in that knowledge gap is to have somebody point it out to us.

Nobody’s perfect. Total omnipotence is impossible and absolutely everybody will have a knowledge blind spot in some regard when it comes to their industry, their market, their product or the way they’re marketing themselves.

Thanks to the internet though, everybody has an opinion and they’re not shy about sharing it. That’s not a bad thing, of course, as people can share the wealth of their experience and attract new audiences and markets to work with on a personal level.

At the same time the increasing noise is making it harder to pick up on and focus on voices that are truly worth listening to. 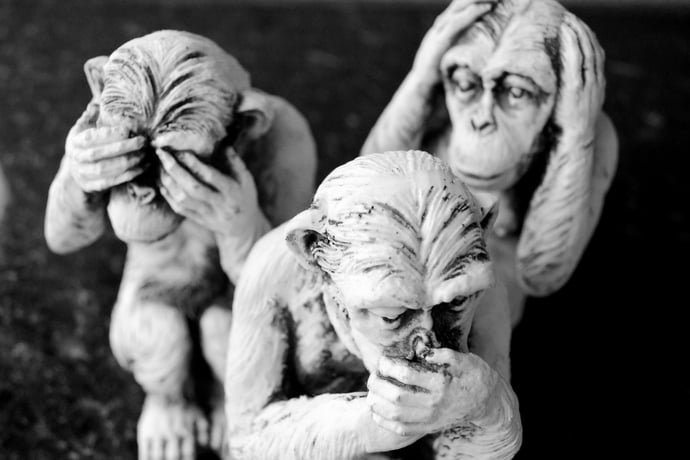 How Pepsi’s blind spots made it lose its fizz

You’ll have probably heard the negative reaction surrounding Pepsi recently and their portrayal of a protest led by Kendall Jenner. Again, everyone has their opinion on it, and there’s a lot of noise to sift through online.

Only, there’s an excellent piece on Campaign written by David Kolbusz of Droga5 who points out most of the noise and objections are coming from within the advertising industry.

“The ad was only a couple notes off the cynical, opportunistic dross that agencies frequently churn out and celebrate these days. We’ve become addicted to doing "good" in the world at the expense of all else,” he says.

“We’ve crawled so far up our own arses that when Saturday Night Live does a gleeful parody of what we’ve become ("Hard cut, Cheetos" – look it up if you haven’t seen it already) we can’t even step outside ourselves and see that they’ve got a point.”

His point is that many modern advertisers, in a desperate bid to point out what’s wrong with the ad, are doing so by looking inward at the industry and not from the point of view of the millennial soft drink consumer who the ad was aimed at.

That makes even more sense when you learn that Pepsi was using its new in-house agency to create the ad because it was sick of working with third-party agencies and wanted to reduce costs. That created a blind spot of being too product-wary in its ad, and not having enough research and awareness of the market it was trying to reach out to.

The United Airlines incident recently highlights other blind spots that may seem painfully obvious to most, but can somehow still go over the heads of the most important people at a company.

The removal of a passenger from an overbooked flight was awful to see played out over social media, but the immediate Twitter response by United and the insistence that the aggressive, physical team ‘got every backing’ from those in charge was an unmitigated PR disaster.

It looks even worse when, after the passenger himself appeared to be blamed despite the evidence, the chief executive makes a reversal after two days and says he’s concerned about the situation, most notably as the company’s share price started to tumble.

Away from marketing, it’s just a terrible example of poor practice and how not to handle a situation. There are obviously company-wide policies that need looking at at United Airlines; PR being one of them.

Before the incident though, it’s probably highly likely that the CEO and others in charge of running the airline would feel like they had no blind spots with the company performing relatively well.

An inbound marketing agency can help you see the light

Two very public and visible problems from companies in working in different industries, but lessons that everybody can learn when it comes to blind spots.

Things happen that you may not expect, that’s a certainty in life. Shifting your focus to a strong, bespoke inbound marketing strategy can not only lessen the impact if things go wrong, but provide a long-term marketing platform for your company growth across a number of channels that you may or may not have experience in.

That’s why working with a knowledgeable, personable inbound marketing agency can be the difference between success and failure as they take an express interest in working alongside you to give your advice and the benefits of their digital marketing experience.

Take social media for example. A lot of companies feel that, because they have access to Facebook and Twitter, they can handle their brand’s social presence and become an expert in a short space of time.

Nothing wrong with that at all, and keeping things in-house may be the best way for you to handle how you present yourself to the world. As United Airlines shows though, you may have a split second to manage a crisis in a very visible way if something goes wrong.

Social media alone won’t help your company grow, either. Effective social media marketing needs some budget to make best use of intricate targeting options on platforms like Facebook and Instagram.

You may be great at managing your brand’s social accounts, but can you produce content at a regular rate? Can that content also be used within a search campaign, and can you complement your social spend with biddable paid search methods to truly accelerate your growth?

The beauty of inbound is that there are a lot of disciplines that can be mixed and matched to achieve almost instant success, and very few people are masters of each craft. It takes a close agency of talented workers in each discipline for real success.

Laying the right foundations with a knowledgeable, supportive inbound marketing agency can not only put a long-term growth plan into action, but give you access to experts in your knowledge blind spots such as PPC, public relations, social targeting, market research and other effective marketing techniques.

Not only can that save you money from your overall marketing budget, but also give you the time to focus on the areas of your business where you’re strongest, allowing you to put the benefits of your experience into the places that matter most for growth.