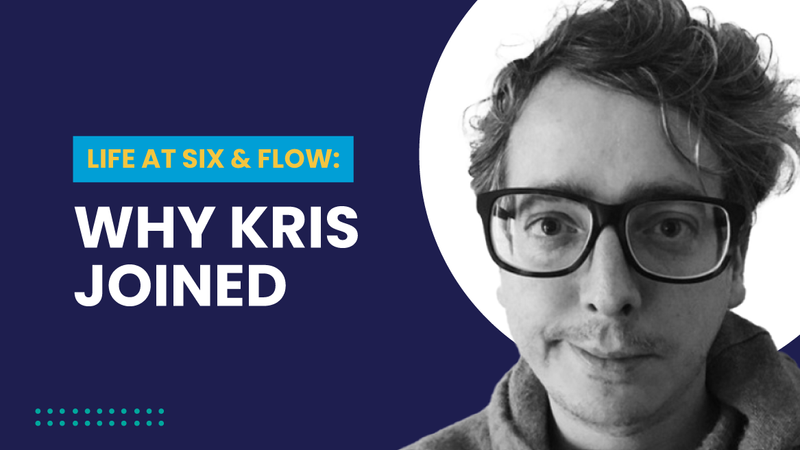 In late February I was contacted by an agency for the newly created position with Six & Flow. I was immediately drawn to the company's warmth, ethics, culture and plans for the future and jumped straightaway at the chance. The process took around eight very relaxed and informal interviews including delivering a presentation to a panel and the chance to met most of the the team, giving me a great insight to the company and who I'd be working with.

In what some might say has been a potential 'leap of faith' from Six & Flow (as I'm not from a traditional marketing background), they were keen to see outside the box and recognise my lessons learnt for other sectors and what that could bring to a team.

Over the first two weeks I was given the freedom to settle in, drop in on meetings and have virtual coffees with every member of the Six & Flow team. Everyone was so nice and welcoming, it really made a change from a corporate 9 to 5 type company.

A little about me

Starting out in the Arts, I've been luckily enough to perform with the likes of Disney, BBC, Netflix, and the Scottish Opera. And very early on, I moved into creating, composing, choreographing and directing shows, that lead to a year's sabbatical even as an attraction designer for theme parks.
In the early '00s, I started to dabble in creating websites, first off as a means for promoting myself but that grew into creating forums and fully bespoke social media platforms coded from scratch.

Failing to take on the big guys in social media, I took up a role with a furniture company to manage their social accounts. Within weeks of starting, I discovered they had struggled to find a CRM / EPOS system that fulfilled their needs and were still taking notes on post-its. I saw an opportunity to take what I had learnt from my personal sites and apply it to creating my own solution for them. Little did I realise this would turn into a 5 year long project developing out production, sales and invoicing tools for the platform.

As 2020 began and I had completed my stretch with the furniture company and I started to create a new venture on my own, a IMDB like platform for live events combining talent management with ticket sales. At the moment I had reached a fully working proof of concept to go live, the global pandemic hit and the right thing to do was to put the project to bed. In September, I joined a Debt Management company as a web systems developer, creating and delivering a new tool to offer advice for those struggling.

Perfectly timed as the solution went live, there was a ping from an email titled. "Have you heard of Six & Flow?"

These first few weeks have absolutely flown by, I now feel very much involved and work with an amazing, talented team. We have some very exciting projects in the pipeline, it's nonstop and keeps me very much on my toes. Despite working remotely (which I have done for a number of years) the team is really close and has a wonderful 'I've got your back' culture. I'm really looking forward to see how we all develop and grow as a department and company. The sky really is the limit.