Why You Need To Take Social Media Management Seriously

Who remembers 2013? Justine Sacco does, it was the year that poor social media management ruined her life (really, we’re not just being dramatic).

Sacco satirically tweeted “Going to Africa. Hope I don’t get AIDS. Just kidding. I’m white!” to her modest 170 Twitter followers. Justine then boarded the plane and switched her phone off. Just 11 hours later, Justine switched her phone back on and the world hated her. Her life and reputation were in tatters, from one very ill thought out 64-character tweet.

Someone went as far as waiting for her plane to land so they could tweet her reaction following the trending hashtag #HasJustineLandedYet. Unfortunately, satire is often misunderstood, and Justine’s tweet mocking white privilege lost her her job and reputation. 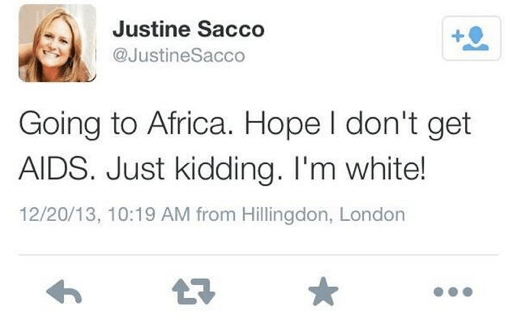 Twitter users felt it was their duty to get justice on Justine, and went out of their way to make sure this was done. One user tweeted “we are about to watch this @JustineSacco bitch get fired. In REAL time. Before she even KNOWS she’s getting fired.” An ideological crusade had been waged against Justine without her even knowing about it, her ignorance only making it more enjoyable for those tweet-shaming keyboard warriors. Justine’s case is just one of many, a catalogue of ex-users who didn’t think before tweeting, resulting in the loss of jobs, friends and acquiring the hatred of many.

Fast forward to 2016, and Becky with the good hair. Who IS Becky with the good hair. Everyone wants to know don’t they? Rita Ora and Rachel Roy were both trolled by the ‘beehive’ for simultaneously posting ambiguous social media messages. Roy’s caption read “Good hair don’t care, but we will take good lighting, for selfies, or self truths, always. Live in the light #NoDramaQueens”. Not exactly hard to see why fans made the connection.

Whether or not the caption was a coincidence, Roy unfortunately invited in the angry wrath of many Beyoncé fans determined to gain justice for their idol. The theme of her latest album Lemonade is infidelity - or is it? There’s a much stronger message of black womanhood running through it, that should catch the public’s attention. Instead, there’s a crusade to discover “whodunit” and memes of Beyoncé’s MET gala outfit with claims her outfit was made out of Becky’s skin (snigger).

It’s not a particularly new phenomenon. Twitter, and the internet in general, has simply given people a new platform on which to publicly shame. Public shaming has been part of society since forever. Think back to Monica Lewinsky. Go back even further, and we get to Mussolini and his mistress Clara Petacci, who were executed and then strung up in a public square in Milan for public abuse. I’m not debating whether or not they deserved that act here, I’m just trying to highlight that justice and shaming are two concepts so intrinsically and historically intertwined that Justine Sacco and that tweet never really stood a chance. But weren’t we taught that two wrongs don’t make a right, an eye for an eye and all that?

Bad social media management could land you in hot water

You probably know all about Twitter and defamation, but if you don’t…you can actually get sued for tweeting something about someone that isn’t true. Remember the case of Lord McAlpine and Sally Bercow back in 2012? We’ll refresh your memory. Back in November of 2012, a report on BBC’s Newsnight incorrectly linked an anonymous “senior Conservative politician” to sex abuse claims. In response to this, Sally Bercow tweeted “Why is Lord McAlpine trending? *innocent face*” to her 36,000 followers.
When it materialised that any claims against Lord McAlpine were unfounded, Bercow, along with a number of others, were threatened with legal action. Bercow was forced to pay out £15,000, while other users who had repeated the claims and had fewer than 500 followers were required to donate £25 each to Children In Need to settle the matter.
Defamation isn’t confined to high profile figures either. Back in 2014, the Guardian published an article stating that libel cases prompted by social media had risen by 300% in a year.

Our parting message? We have two: Tweet responsibly, and put down your pitchforks. The first goes without saying nowadays, and Justine Sacco unfortunately learnt the hard way, but even if you only have a handful of followers – you can still get into trouble for the things you tweet. Secondly, people do make mistakes, and hopefully one day this culture of shaming and trolling will die a death. Find out the facts before you get behind your keyboard and try to end someone’s career on Twitter.

As a digital marketing agency and Hubspot partner, we take social media management seriously. We take the stance that if you wouldn’t say it in front of your momma, don’t say it on Twitter. Not only could potential employees sneak a look at your feed before an interview, you could also unfairly damage someone else’s reputation - and no one wants the karma that’ll come with that. Obviously that doesn’t mean be boring on Twitter (we all love a dog selfie and a meme about a goat.) Just keep it respectful and you’ll be fine, free and sans of bad karma.