All knowledge has value. Don't miss things without reason 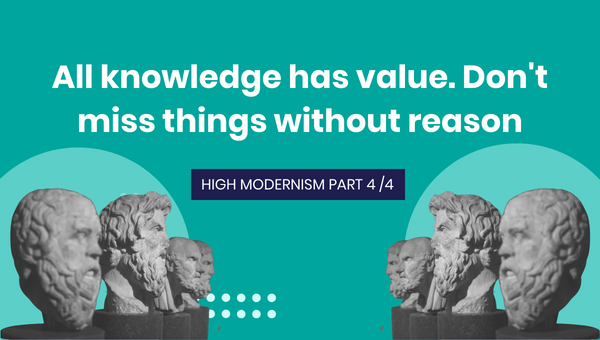 This is part 4 in our series surrounding high modernism and Digital transformation.

Why? Well, because Statecraft and high modernism have impacted some of the greatest nations in history and all our everyday lives in myriad ways. In short, it’s important

You can find the other blogs in this series here:

Part 4. All knowledge has value. Don't miss things without reason.

Humans, especially those in the pursuit of technical and scientific progress have a tendency to dismiss what they see as “backwards” “old” or “unscientific”. This is a fundamental mistake when interpreting information.

To put it simply just because something is not described in scientific or technical terms does not mean it is unintelligent. It is hard to see the function of a thing when you are too close to or far from it so you must not dismiss any type of information if you don’t understand its context.

Imagine you were in the centre of a maze. From the ground, all you see are walls and doors. If you were then 100ft up you could see all the wall patterns but none of the doors. If you could have both perspectives you could find your way out much quicker. Knowledge is contextual and environment based and none of it is invaluable.

The Greeks had different terms of types of knowledge. Practical knowledge was referred to as “mētis” whereas scientific or technical knowledge is known as “techne”.

Mētis roughly translates to “cunning” in English. However, mētis represents a wide array of practical skills and acquired intelligence in responding to a constantly changing environment.

All human activities require a considerable degree of mētis such as flying a kite, fishing or riding a bike. Each of these skills requires hand-eye coordination that comes with practice and a capacity to “read” the situation. They are exceptionally difficult to teach apart from engaging in the activity itself. Writing down instructions for riding a bicycle would seem crazy to a normal person.

The other type of knowledge is “Techne” which is what we would consider scientific knowledge or systems of reasoning in which the findings may be logically derived. Where “mētis” is contextual and particular, techne is universal. In the logic of mathematics, ten multiplied by ten equals one hundred everywhere and forever. The rules of techne provide for theoretical knowledge that may or may not have practical applications. Techne is characterised by impersonal, often quantitative precision and concerned with explanation and verification, whereas mētis is concerned with personal skill, or “touch,” and practical results.

Both are equally as valuable depending on the context. So for example If your life depended on your ship coming through rough weather, you would surely prefer a successful captain with long experience to, say, a brilliant physicist who had analyzed the natural laws of sailing but who had never actually sailed a vessel. And vice versa if you wanted to study and refine your vessel's design you may want an objective, technical approach over the anecdotal, specific experiences of one experienced sailor.

On a much bigger, higher-stakes, playing field diplomacy and politics more generally are mētis-laden skills. It is becoming clearer in our polarised political environment that technical “facts” do not connect with voters to win power, but mētis-based rules and values do not make for good policy around technical subjects such as the climate emergency. You can’t write a scientific manual for good politics…. If you could we would have never suffered Boris Johnson.

Why is this important? Because the 2 forms of knowledge often overlap and are derived from each other. If you choose to focus on one without the other you are setting yourself up for failure.

For our first example, we go to Ireland. Oral traditions are often seen as primitive in comparison to the written word. Look at the Irish language and history, a lyrical language and rich culture utterly dismissed as savage for hundreds of years. Pre the use of the written word, Ireland in the early centuries was mainly an oral history. This being the case they could not simply use bland descriptions to solve complex situations. So they created descriptive myths that were magical but often distilled core knowledge.

A real example of Irish mythology regards “Slieve Mish” a mountain in Kerry. For thousands of years, people have gone there when they had mental illnesses to drink the waters as it is said they have magical powers. The myth goes that this comes from a princess who saw the death of her father and fled to the mountains where she became a “Gelt” a harpy-type monster. She stalked the mountains killing anyone who passed through them. The king of the land sent his army but she killed them all so one day after years of failures he decided force was not going to work so he sent his harp player instead.

The harp player went to the mountain scared and alone. He played his music for the monster and soothed her for months. Eventually, the love and care he showed her made her change back into a human and she became his wife. The music he played and the love and care he gave seeped into the mountain water and for years cured and soothed the mental illnesses of any who drank it.

Now, this may sound like beautiful nonsense, but regardless, for hundreds of years people with mental health problems would travel to the mountains and, stranger still, they would report that after drinking the water they felt calmer and their symptoms diminished. So in the mid 2000s the university of Kerry did a study on the water in the mountains and found something strange. The mountain had very high concentrations of Lithium, a common drug for the treatment of mental health disorders.

So this beautiful nonsense was actually scientific knowledge translated into a form of common knowledge.

So how does this relate to digital transformation? As we will go into in more detail below just because information does not appear or fit your ideas or scope doesn’t mean it does not have value in your plans. Not every piece of valuable knowledge is statistical or schematical, core truths can be found in simple stories. By ignoring knowledge because you don’t like its format, can harm your wider transformation efforts.

If we look at the previous blog and the examples of Lenin with the peasantry and small farm, he ignored evidence contrary to his beliefs as he did not think it intelligent. It was in fact a critical error to dismiss and manipulate this information simply because he didn’t like the people who had it or how it was presented. This knowledge could have given a very different outcome to the whole Soviet project but he was too ideological blind to see it.

For the next example, we go back to early America. When the first European settlers in North America were wondering when and how to plant new crops such as maize, they turned to the local knowledge of their Native American neighbours for help. They were told by a local chief to plant corn when the oak leaves were the size of a squirrel’s ear.

Embedded in this advice, was a finely observed knowledge of the New England spring. By following this advice the farmers were able to avoid the late spring frost and grow new crops.  As a rule of thumb, it was a nearly foolproof formula for avoiding a frost. It was a distinct accumulation of collective knowledge distilled into a simple rule.

What makes this rule so brilliant is it ability to inform farming practice over a vast area of the country. All you needed was an oak tree and squirrels.

Relating this back to a digital transformation project you need to get all levels of the company involved in the project as the knowledge they have will inform you in different ways. A marketing and sales manager who “just knows” the target market intimately and can create content to connect with the reader base is as valuable as the analyst who can tell you the demographic breakdown of the reader base to within 0.1% points.

Relying too much on one type of information can create extremes or what we would call a “fluffy” process ( too based on subjective or value-based and therefore hard to quantify) or a “cold” process (too focussed on numbers and technical analysis which miss the opportunity to connect deeply with the people). However combining this information into core principles and approaches can give you rules and processes that are effective, simple, and wide-ranging.

The state simplifications and utopian schemes we have examined in earlier chapters all concern activities that are carried out in unique settings. All farming takes place in a unique space (fields, soil, crops) and at a unique time (weather pattern, season, cycle in pest populations) and for unique ends (this family with its needs and tastes). A mechanical application of generic rules that ignores these particularities is an invitation to practical failure, social disillusionment, or most likely both.

The generic formula does not and cannot supply the local knowledge that will allow a successful translation of understandings to successful, nuanced, local applications.

By not realising that “mētis” is valuable knowledge high-modernist schemes deprive themselves of the data and expertise that they need to be successful.

A successful digital transformation requires a broad church. You need to take technical analyses and combine it with the practical knowledge of the stakeholder. Techne and Metis need to be combined in order for success.