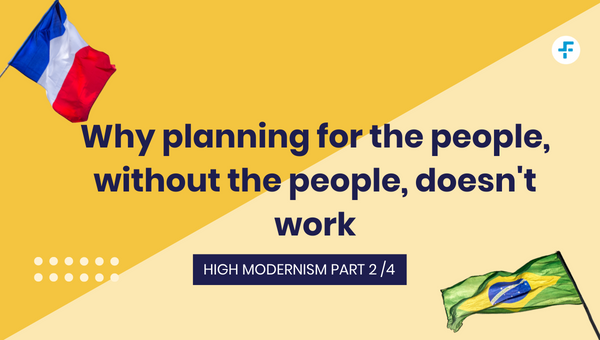 This is part 2 of our series surrounding high modernism and digital transformation.

Statecraft and high modernism have impacted some of the most significant nations in history and all our everyday lives in myriad ways.

If you haven't read part 1 yet, you can find it here.

The next lesson to be taken from High Modernism (HM) concerns detachment of scope from purpose and people. By this I mean, strategies take on a life of their own and begin to go shoot off on tangents. The “Goal” can begin to separate from the “purpose”. To explain this we need to look at the work of Le Corbusier, a Swiss-French architect, designer, painter, urban planner, writer, and one of the pioneers of what is now regarded as modern architecture.

Le Corbusier is known for many works in urban planning, which included the design of Chandigarh, India, and his influence on Brasilia, Brazil in the 1950s. Le Corbusier was a brilliant man obsessed with sleek, clean, linear aesthetics that gave his work a visually elegant and timeless quality.

Le Corbusier hated Paris… not just the people but the design of the city. He did not only see the city as visually displeasing but also inefficient and wasteful. His view was that a lack of spaces for dedicated purposes made the city a labyrinth of wasted time and increasing depravity. He felt that through the redesigning of cities he could improve and rationalise the space and improve its function and the moral condition of its citizens.

However, the reality is that cities are built heavily upon the cultures of the people within them. They become the living embodiment of generations of cultural interactions. Naturally, people don’t disseminate themselves into strict linear areas for day-to-day activities. They mix and mingle and socialise as humans do.

“The poverty, the inadequacy of traditional techniques have brought in their wake a confusion of powers, an artificial mingling of functions, only indifferently related to one another... We must find and apply new methods...lending themselves naturally to standardization, industrialization, and taylorization... If we persist in the present methods by which the two functions [arrangement and furnishing versus construction; circulation versus structure] are mingled and interdependent, then we will remain petrified in the same immobility.”

In his view, city design should be an exercise in planned functional segregation and this became standard urban-planning doctrine until the late 1960s. There would be separate zones for workplaces, Each district had one and only one function.

It makes sense in many ways. It is far easier to plan an urban zone if it has just one purpose. If we remember back to the first blog on high modernism, simplification is a necessity of statecraft. When two purposes must be served by a single facility or plan, the trade-offs expand. When several or many purposes must be considered, as Le Corbusier noted,

“the human mind loses itself and becomes fatigued.”

The Le Corbusian city was designed, first and foremost, as a workshop for production. Nowhere did he admit that the subjects for whom he was planning might have something valuable to say on this matter or that their needs might be plural rather than singular. He wanted the design to ascend them and the “ misery, confusion, “rot,” “decay,” “scum,” and “refuse” of the cities.

“How many of those five million [those who came from the countryside to make their fortune] are simply a dead weight on the city, an obstacle, a black clot of misery, of failure, of human garbage?”

He wanted the founders of a modern city to “prepare to act ruthlessly” for order as he saw. He saw the secondary danger of the slums as a potential revolutionary menace to the authorities.

“From the huddle of hovels, from the depths of grimy lairs there, sometimes came the hot gust of rebellion; the plot would be hatched in the dark recesses of accumulated chaos.... “

Le Corbusier’s and his potential backers wanted a legible, geometric city that would facilitate police work, taxation and the engineering of the social structures of its inhabitants.

Brasilia: The Ideal of Functional Segregation

There are not many cities that met the ideal of functional segregation but Brasília is about the closest thing we have to a high-modernist city, having been built more or less along the lines set out by Le Corbusier. Designed by Oscar Niemeyer and Lucio Costa both followers of Le Corbusier doctrines, Brasilia was to be a new city on virgin land. The city was then designed from the ground up, according to an elaborate, separate plan.

Housing, work, recreation, traffic, and public administration were each spatially segregated. Brasília was itself a single-function, strictly administrative capital.  It made no reference to the habits, traditions, and practices of Brazil’s past or of its great cities, São Paulo, São Salvador, and Rio de Janeiro.

It is a city without streets, with no winding alleys or small corners for conversation. Costa and Niemeyer were banishing the street and the square from their utopian city. They believed that they were also banishing crowded slums, with their darkness, disease, crime, pollution, traffic jams and noise, and lack of public services.

Virtually all the needs of Brasília’s future residents were reflected in the plan. Big roads, big spaces, and grand buildings give space and function to the city, removing the crowds and the smoke. The issue was that these needs it was designed to meet were abstracted from them and formalised. When someone says they need more space in their house, they don’t mean they want a warehouse. When they say I want more food they rarely mean a full cow.

“Although it (Brasilia) was surely a rational, healthy, rather egalitarian, state-created city, it made not the slightest concession to the desires, history, and practices of its residents.”

Soon after the first inhabitants moved in the term Brasilite, meaning Brasíl(ia)-itis appeared. As a joke disease, its definition was “a daily life without the pleasures—the distractions, conversations, flirtations, and little rituals—of outdoor life in other Brazilian cities”. The city was bland, a beautiful, functional social graveyard where the inhabitants could not leave any cultural mark as they have done historically in Rio and São Paulo.

“The high-modernist urban planning, while it may have created formal order and functional segregation, did so at the cost of a sensorily impoverished and monotonous environment—an environment that inevitably took its toll on the spirits of its residents.”

It was a city without a culture designed for the “administrative man”, not the common man. The city became a city of “elites” and the blue-collar workers, some 60,000 of them that had commuted from the periphery of the city to construct it were excluded from its day-to-day habitation. These people without a place in the city they had helped construct began to create houses, and communities on its outskirts, more akin to normal cities with a culture of their own.

So in a rather funny twist of fate, the planners had designed for one city but in effect created 2 separate ones with an economic reliance on each other but little else the same. You could argue that the planners merely moved the aspects of the city they despised to the outer rim instead of solving for the people as originally intended.

A critique of High Modernism came from Jane Jacobs’s book The Death and Life of Great American Cities (1961). Jacobs’s argument in its simplest terms is that there is no look between something looking good and it being able to perform its function. In even simpler terms, You can’t fry a Fabergé egg.

“Why should we expect, that well-functioning built environments or social arrangements will satisfy purely visual notions of order and regularity?”

Her argument was that complex functional systems do not display visual surface regularity.

“To see complex systems of functional order as order, and not as chaos, takes understanding. The leaves dropping from the trees in the autumn, the interior of an aeroplane engine, the entrails of a rabbit, and the city desk of a newspaper, all appear to be chaos if they are seen without comprehension. Once they are seen as systems of order, they actually look different.”

Jacobs was a “Functionalist” she asked, “What function does this structure serve, and how well does it serve it?” Not “What is my ideal visual desire for this design and how can I make the function fit within it.” in her view the “order of a thing is determined by the purpose it serves, not by a purely aesthetic view of its surface”.

The design of Brasilia did not take into account the actual economic and social functions of an urban area or the individual needs of its inhabitants. Its most fundamental error was an entirely aesthetic view of “order”. This error drove them to the “further error of rigidly segregating functions” and as described above created a dual city. Segregating functions whilst aesthetically pleasing and functionally “Easier” to administer makes the structure itself weaker. A richly differentiated neighbourhood with many kinds of spaces is a more resilient and durable neighbourhood.

Bringing this back to the original point, With regards to Brasilia the “Goal” to create a uniform, efficient, easy-to-administer city was achieved. But the “purpose” of the project to create a habitat for the advancement of human life, love, community and culture was very much not achieved. When Digital Transformation Planning, you must ensure the goal and purpose align correctly.

You may want systems and processes, assets and data that are aesthetically and to a degree functionally pleasing to “you”, but you must balance this with the purpose of the activity. If these “aesthetic benefits” come as functional detriments to how those people experience your product or company, then you will not solve the problem or meet the goal. You will simply move the problem elsewhere and you will not get the collective buy-in required for sustained adoption. Building on the analogy from the start of the heading, If you do serve someone a fried Fabergé egg, they will definitely go somewhere else for breakfast.

“To see complex systems of functional order as order, and not as chaos, takes understanding. The leaves dropping from the trees in the autumn, the interior of an aeroplane engine, the entrails of a rabbit, and the city desk of a newspaper, all appear to be chaos if they are seen without comprehension. Once they are seen as systems of order, they actually look different.”

The Death and Life of Great American Cities Jacobs 1961