Millennials are annoyed because they can’t even have a trawl through their Facebook newsfeed without an advert popping up. Poor millennials, we really feel for them. We’re actually not being completely sarcastic here. According to Internet Retailer, 56% of digital natives and 48% of all US online consumers have either cut back or stopped using social networking altogether because of the presence of targeted ads in their feeds.

If you’ve got to this point and you’re wondering what the f*** a millennial is, it’s probably best we tell you. Millennials, or generation y, as they’re also known, are today’s demographic of 18-34 year olds, who were born in the 1980s or 90s. We had the baby boomers, the generation X’s, and now it’s ‘millennials’. Which is, undeniably, a slightly wanky term. Not many want to be associated with the term millennial, which if you’re partial to a bit of Urban Dictionary, you’ll know why.

Being referred to as a millennial feels a bit like a slap in the face or a backhanded compliment from your sister accompanied by a sly smile. Millennials are, not in our words, entitled, lazy “emoji-loving phone clutchers who dream of starting a cereal café.” (We like that one, well done to The Guardian). And at the moment, Millennials are pretty pissed off, thanks to social media advertising.

When it comes to social media and trying to stand out amongst the masses – it’s pretty much impossible for brands to be seen without targeting individuals through social media advertising. Have you ever posted from a brand organically and seen how many people it reaches? Shocking isn’t it? Unfortunately, Facebook doesn’t always exactly help organic posts to reach the masses.

In fact, organic posts will often only reach a very slim proportion of people who like your page, which is obviously very frustrating. How else is Facebook supposed to make $11.6 billion a year though? Yeah, we want to shake our fists angrily too.

Don’t get too annoyed though. A study carried out by Social Fresh found that “95.8% of marketers say Facebook presents the best return on investment among social networks”. So, although it costs, many marketers would probably agree that Facebook offers the best value for money when it comes to targeting millennials. 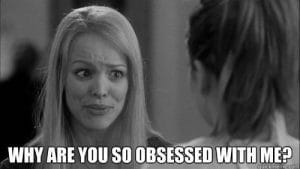 Why are social media advertisers so obsessed with me?

Anyway, back to millennials and their woes. Because millennials are regarded as generally being quite switched on and tuned into social media happenings, they’re being targeted a lot more than other age brackets. Which is why they’re probably all channeling their inner Regina George, and thinking: “Why are you so obsessed with me? God Karen, I only looked at Taco Bell’s menu once online, why are they following me around social media now?”.

This, in fairness, is pretty annoying. Millennials are already aware and critical of social media advertising, so it’s important that your ads are actually relevant to them.

Buying an advert isn’t enough anymore, anyone can do that. You need to engage with consumers on an emotional level, especially on social media, where consumers go to be entertained and amused, not sold to. Consumers want to be delighted, they want to be part of a conversation, not just given the hard sell.

One way in which brands can increase sales and generate interest is through celebrity endorsements. Sure, it’s expensive, but when celebrities and bloggers endorse particular products, people do listen. Perhaps that’s because consumers have already emotionally invested in these celebrities, and therefore think that whatever they endorse is the dog’s bollocks/cats pajamas. Probably best to avoid hiring Scott Disick for the job though.

It’d be wrong to talk about social media advertising and not talk about Snapchat, one of the fastest growing social media channels. Promoted snaps and filters are popping up all over the place. The reason why Snapchat is a popular place for brands to advertise? It’s fun and it spreads like wildfire.

Think about it. You’re on Snapchat, Dr. Pepper have got a filter where you can virtually drink a can of Dr. Pepper, you send it to your mate or put it as your story, they get a craving for Dr. Pepper…they go buy a Dr. Pepper. It works. Sometimes. Especially if you’re obsessed with fizzy drinks.

Brands that think creatively about content and actively engage with consumers will ultimately win. Creative campaigns get people talking, and at the end of the day, that’s the aim of the game.

An oldie but a goodie social media advertising campaign

We’ll end this blog by talking about one of our favourite social media advertising campaigns that actively engages users, tells a story and isn’t too pushy pushy with the sell. It’s an oldie (in terms of how fast social media moves) but a damn good goodie. Of course, it’s the IKEA_PS_2014, which we’ve mentioned in a blog before (because it’s so bloody good). Ikea built a website on Instagram. Literally. If you go onto the IKEA_PS_2014 Instagram account (we kindly gave you a link above) click on any picture and you'll go directly to an Instagram account entirely devoted to that product. This even includes a link to the product on the Ikea website where you can buy it. Obviously that project will have included a hefty amount of groundwork, but it’s so cool and makes us giddy whenever we think about it.