You Had One Job: Social Media Advertising Gone Wrong

Social media advertising is not a particularly new phenomenon. In fact, sponsoring a celebrity to endorse your brand has been around since baseball legend Babe Ruth endorsed Red Rock Cola. However, social media advertising costs a lot, and when it goes wrong, it’s pretty embarrassing for the company. A company who undoubtedly will have worked hard (and paid a lot) to secure a deal, only for it to damage their reputation by making them seem a tad desperate.

Did you see that picture of Selena Gomez with her godson? How about that one of Taylor Swift chilling with her cats? The days of celebrities remotely beckoning us from music videos and the big screen are long gone. Instagram and other social media platforms have given us a close up and intimate account of what life is really like as a celebrity.

Selfies with cats, drunk snaps with friends and candid vacay shots all make you feel somehow closer to that person. But how real are they? Are those candid snaps really so candid? Or is what we’re seeing merely a construction of “reality”. It’s extremely likely that some of those so-called “real snaps” have been carefully planned and executed by a team of professionals representing the celebrity. Sorry to be cynical, but it’s the most likely option.

It’d be silly to talk about social media advertising gone wrong without giving a special mention to Scott Disick (or his self-titled name Lord Disick) and Naomi Campbell. Recently, these two gave us a bit of insight into just how “real” those Instagram snaps are. We’re talking about companies sponsoring celebrities to mention their brand on social media. 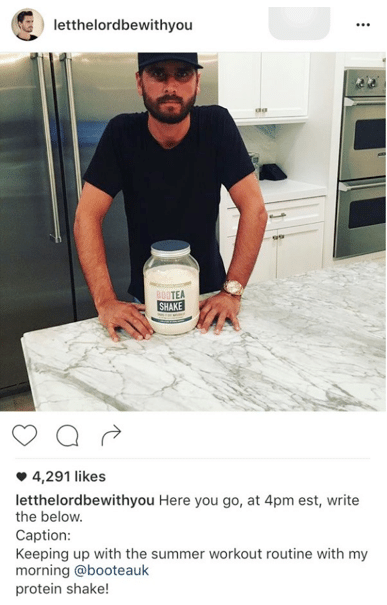 Scott Disick recently made headlines for outing a celebrity sponsorship on social media. You probably spotted it, but if you didn’t… he absentmindedly copied and pasted text directly out of an email from the company Bootea. Unfortunately, Scott managed to also copy their instructions for the post. Obviously the post was swiftly deleted, but not before eagle-eyed users of Instagram spotted the blunder (we love you guys). Many celebrities and “Insta-Famous” people will receive free products or payment in exchange for posting positive feedback on social media. Unfortunately for Bootea, Scott highlighted just how constructed the reality of these posts are. In a very awkward way. To 15.9 million people.

A couple of weeks later Naomi Campbell followed suit and managed to “pull a Disick” by making exactly the same mistake. Naomi quickly edited the post, but again, not before you guys managed to spot it. The caption, again like Scott Disick, accidentally included the beginning of the email “Naomi, so nice to see you in good spirits!!! Could you put something like:…”

Naomi then edited the post to include the #TheseAreMine, a somewhat half-hearted attempt to crush any speculation of the model being provided with a free pair, (along with a hefty sum) in exchange for the Instagram post. 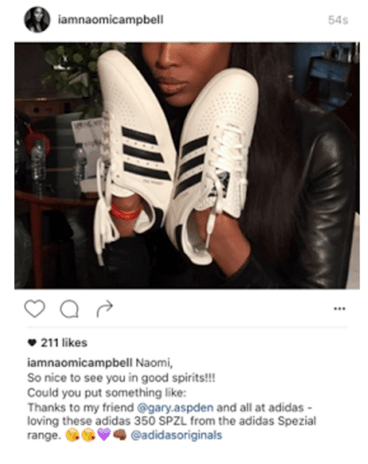 Are celebrity sponsors worth it?

What happened to #Spon? We were under the impression that celebrities had to be explicit on Instagram if they were posting about a product they had been paid to endorse?

You’ve probably seen it in your own Instagram feed, flicking through and stumbling across Charlotte from Geordie Shore with sparkling white teeth, holding a teeth whitening package and the #Spon featuring at the end of the post. What some of the slightly less cynical users of Instagram will probably assume is that this £12.99 teeth whitening kit has managed to make Charlotte’s teeth the colour of pasteurized milk, when in reality she’s probably had a very expensive professional job done.

Of course, celebrity advertising works. If your company had the money, why wouldn’t you advertise through a celebrity with an engaged community of followers? Popular vlogger Zoella earns £50,000 a month (sob) by promoting products doing just that. Yup, she earns roughly double the UK’s average annual salary in one month.

Shamefully, I once bought a lip balm that Millie Mackintosh tweeted about, which I’m pretty embarrassed about now. As a young impressionable first year uni student, I somehow believed that buying the same product as Millie would somehow improve my life (it didn’t). That’s the danger of celebrity sponsorship on Instagram. Sure, it’ll sell the hell out of your product, but do these products actually work the way we’re told they do? Or are we just buying them because a beautiful celebrity got paid £20,000 to tell us how great they are?